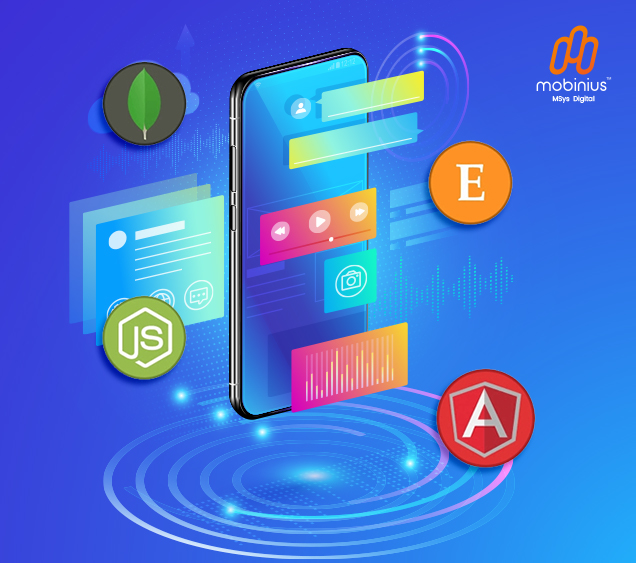 The amount of impact technology holds in every walk of our life is quite huge. It is one of the significant reasons for every technological aspect to have a wider reach. One of the most remarkable of all the technologies is web applications using MEAN stack, their vitality, and the amount of customer base they have developed. These factors have also led to the growth of web app development as a business & developing a business with the help of apps.

The importance of stack is thus visibly so high. Presently, there are ample stacks available, but only a few are dynamic.  MEAN Stack is one of the most vibrant ones due to its innate features. Immediately, the next questions to follow would be – “what is mean stack?”, “why use mean stack?” “when to use mean stack?” etc. According to the survey, Angular JS and Node JS are the most popular frameworks with 44.3% and 47.1% usage, respectively. Explore to know more about the mean stack, & the reasons that make Mean Stack the best stack for one’s web development.

What is MEAN Stack Web Development? 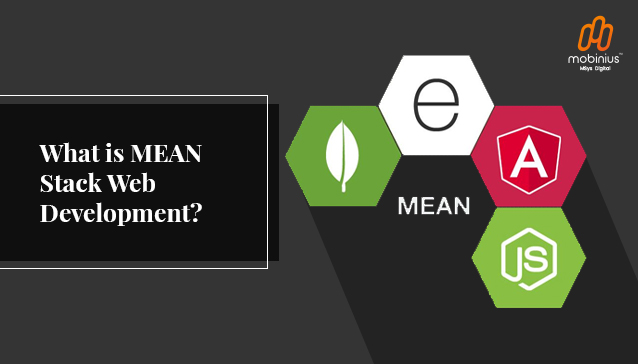 Mean stack, an open-source JavaScript-based technology for creating the best websites as well as web apps. Since JavaScript is the renowned & most sought-after language preferably for web development, it would be of greater comfort for the developer & user while using mean, since the mean stack is nothing but javascript mean stack. Very crucial & great technologies like Mongo dB, Nodejs, Angular & Express are combined in the creation of apps/web using Mean stack development. Also, most importantly, the mean stack can process a single language & use it for both interfaces – client & server sides, i.e., front-end & back-end.

Mongo dB, one of the important technologies of the MEAN web stack, is a unique platform for the storage of a database that stores the data as documents.  It’s also so handy & nice to use it even if the data would evolve over time. Also, the users are allowed to query the data without interrupting the whole stack. Additionally, the key point to note is that users needn’t learn& master SQL, needn’t use relational databases like the tables & rows, but shall only find amusing collections & documents of storage. Thus, data handling, organization & manipulation & excellent administrative capabilities are rendered with Mongo dB.

Developing applications using mean stack, or any other stack involves front–end development (the interface the users would see), & the back-end development (server-side, in combination with the database to have a hold of the data. Express.js or Express is JavaScript software; open sourced & is the back-end component for development in the MEAN stack. It is, in fact, the application framework for another important technology of mean stack – Node.js.  Since Node.js is very important for spontaneous, secured & smooth working of the app to be designed,  Express.js also has an inevitable role in the development of mean stack.

Node.js/Node, an open-source, JavaScript software, is a development platform for the execution of the JavaScript code in the server-side /a part of the back-end development.  It is very useful for the apps that require constant association from the browser to the server. It is also the most renowned & famous platform for real-time applications that include news feeds, chats, etc. 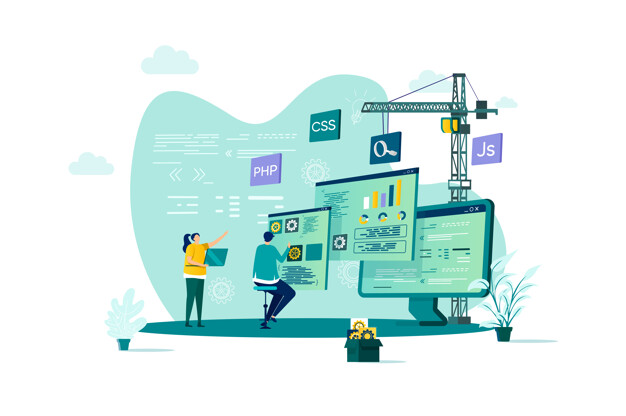 Due to this, it serves as a back-end component for successful & popular businesses like eBay, etc. Hence, node js mean stack, like any other component of Mean stack, is also one of the most used environments & is at its best when combined with other excellent technologies.

The workflow in Mean stack

A Mean stack development company runs through very few basic protocols that define its routine. Preliminarily, if a client places a request for a web app development, the request hits the Angular JS as it is the front-end component (client-side framework).  This request, received from the Angular JS, is passed on to Node.js, the back–end platform via Express.Js, the web application framework for Node.js.

Read More : “Why you must choose MEAN stack development for your upcoming projects“

Then, Express.Js permits the request to reach out to the database & Mongo DB, the platform where the database is collected & controlled, accepts the client’s request & sends the necessary response to Node.Js via Express.Js. Finally, the response from Node.Js  reaches the Angular JS that offers a response to the user. 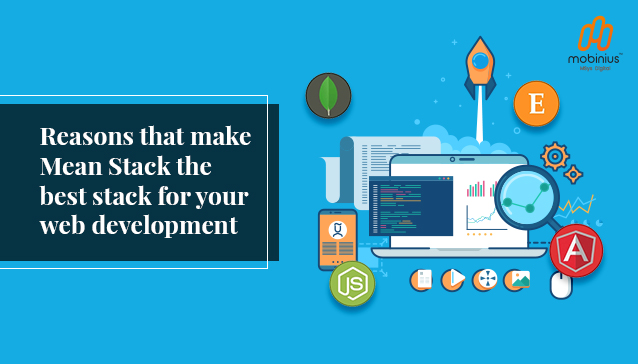 As aforementioned, the request is processed in a systematic & streamlined manner. Thus, this channelized workflow helps in getting a secure as well as faster app development.  These benefits of security & speeder delivery combined with greater performance are something lucrative.

The four key technologies used in the development of an app in the mean stack are Mongo dB, Nodejs, Angular & Express. Individually, the amount of reputation, preference, quality of work they rendered to many big institutions is something to look up to.

For instance, Node.js presently has 28000+ websites using it. The same or more popularity is seen for other technologies too. Hence, it would be a wonderful melange & beautiful blend of all the technologies & the app can be technically so strong in a way that even the stringiest of the expectations of clients are satisfied.

Yet another problem of being overwhelmed & focus being split into many languages doesn’t occur in the mean stack.  It is because of the vital advantage Mean stack offers – for both front–end development as well as back–end development, only one programming language, JavaScript is used. It also aids in the easier implementation of the idea of the client & rendering a great app.

Mongo dB is so efficient in handling data & also has an added benefit – it helps in hosting the apps in the cloud too easily.  Also, Mongo DB is the best option for cloud compatibility & storage integration as it lessens the costs of disc storage space by offering effective cloud solutions & it’s also affordable since it’s free & open-source software.

Isomorphic coding enables easier transferring of code from one framework to another & one is of the top features in developing a web app & Mean stack offers it, making it more reliable.

One of the prominent characteristics of Mean stack is the performance of the apps developed with mean stack.  A combination of the best technologies has rendered it the best of performances. Also, the mean stack helps in building apps with the highest speeds delivered. But, everything can be accessed free of cost & that’s the best part of the mean stack.

For more information on how can help you leverage your technologies, feel free to reach out to us here.

Apps have played a crucial role in the present world. The right technology stack must be employed for a greater reach of the apps.  Mean stack is one of the finest stacks since it has a channelized workflow, best performance, higher speeds, availability of isomorphic coding & cloud integration, etc. Thus, the best stack is one of the best stacks for one’s web development. One’s app can also develop into one of the most popular mean stack apps if the idea is excellent as mean stack technology would complement one’s killer idea.

1.What is the mean stack web development?

Mean stack web development employs the usage of the mean stack, an open-source Java Script software for the complete back end to front end support of the app.

3.What does a full stack developer mean?

A full-stack web developer is a professional who can work in both back end & front end supporting software. They know to program a server (like python) & browser(like JavaScript).

4.Why use mean stack? 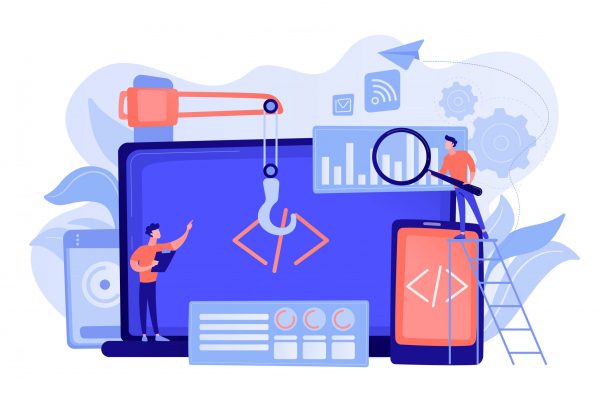 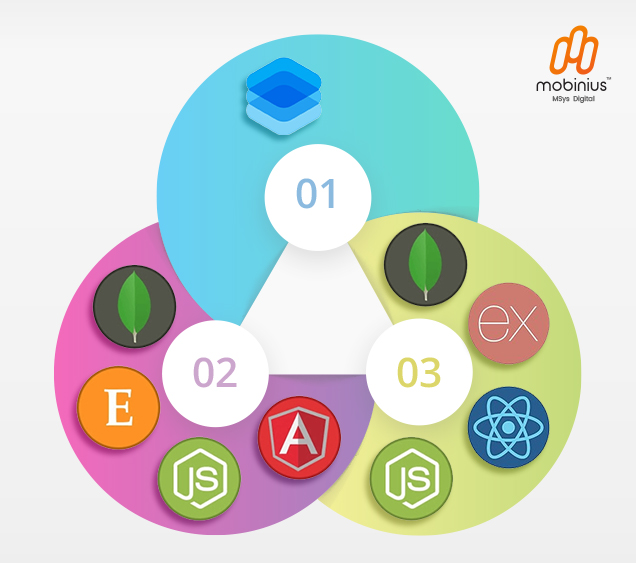 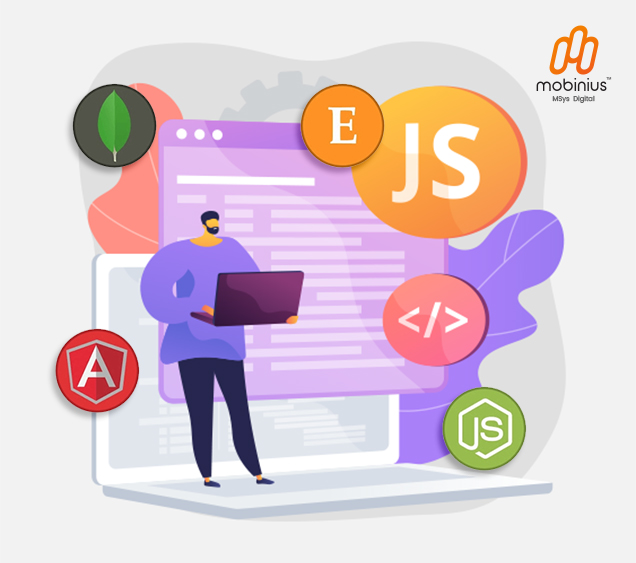