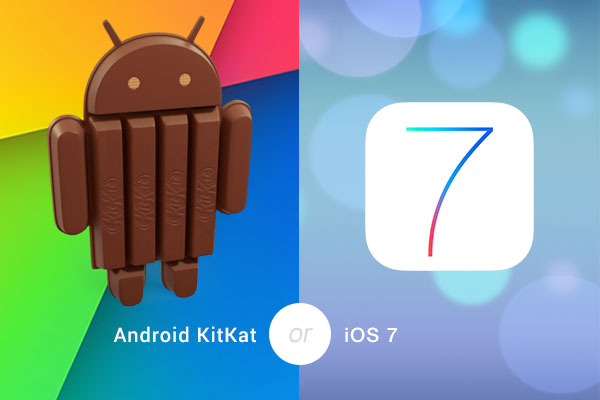 There is a dilemma on Android Kitkat beating iOS 7. Wherein, each of them having their own pros and cons. Every technology needs to invigorate and proceed further to compete with the market demands and growth. Both Google and Apple are no different from it, every year a new version of Android and iOS are been released as Android Kitkat 4.4 and iOS 7.

Apple has redesigned its interfaces in iOS 7. iOS 7 uses more animations which are visually pleasing and smooth. iOS is as easy to use as always, but it has its own set of problems like slow download, enormous memory consumption. There is change in Font which appears to be thin and light in comparison with earlier version. “Control Centre” is a new feature used by swiping up from bottom. The main purpose to have Control Centre is to provide shortcuts for regular apps used as Camera, Wi-Fi and others. Apart from these said changes there are many more on iOS. Zooming and scrolling in iOS and Android are same. Autocorrect feature in Android is simpler than in iOS. On Flagship devices iOS works on so smooth. Wherein, iPhone 4 struggles to use iOS 7. Battery life is conserved by placing few applications in “Frozen” state.

Although, some changes are made to the Android interface in Android Kitkat 4.4 there is no dissimilarity from the former ones. Android has got customizable homescreens. Due to the greater use of transparency the user interface has a color scheme which is lighter. In this Android kitkat setting menu and dropdown menu are merged which helps an easy switch between the both. The messaging app is replaced by new Hangouts app. Android Kitkat can perform a diverse range of tasks relating to search. From the same contact the app can’t thread Hangout messages and SMS together. Android apps are more system integrated. A separate driver is maintained by Android to keep all its apps. Only, user preference apps are shown on home screens. User is asked for space utilization while Android system detects available space like open memory areas. The new iOS update Google+ app will be able to upload photos to the cloud even when it’s actually not open. Also, Google’s Play music allows Android users to upload 20,000 songs of their preferences.
Who Tops the Show? : It is a clash of Titans. Both resulting equal pros and cons with a tie between them, iOS 7 tries to leave its impressions over Android kitkat 4.4. There is a huge change in iOS 7 from iOS 6. Wherein, there are no noticeable changes in Android kitkat. Despite of many new features, Android kitkat couldn’t trounce iOS. Regardless its efforts, Google should still try for best apps and updates as iOS is no less than a challenging and fierce competitor. Android leads the show when it comes to notifications. Though, not many changes made to the predecessors, it is still far ahead of iOS.